In the previous article we assembled a first version of the metagenome, using a fast assembler creating a lot of rather small contigs. We need now to separate these reads according to the different genomes present in the assembly: this is called binning.

To tease apart the different genomes we are relying on several concepts:

Many tools have different approach to deal with this. In this post we are going to use a R package called Genome binning tool or gbtools, from another colleague of mine Brandon Seah. I will probably go over other tools in future posts. He’s approach is a simplified version of the work of Mad Albertsen on differential coverage genome approach (you can find the original paper here).

The gbtools package has been developed to give separate genomes from differential coverage technique when possible and by GC against coverage value. Using these values the contigs are then displayed on a graph which allow the user to visually identify different group of contigs or bins.

This package gives you a lot of freedom in selection of genomic bins by displaying contigs with tRNAs; essential or unique genes; or what ever you can think of. Brandon has a quite well explain wiki on his github page.

We are going to put our tongue metagenome through this package and see what we can take out of it. 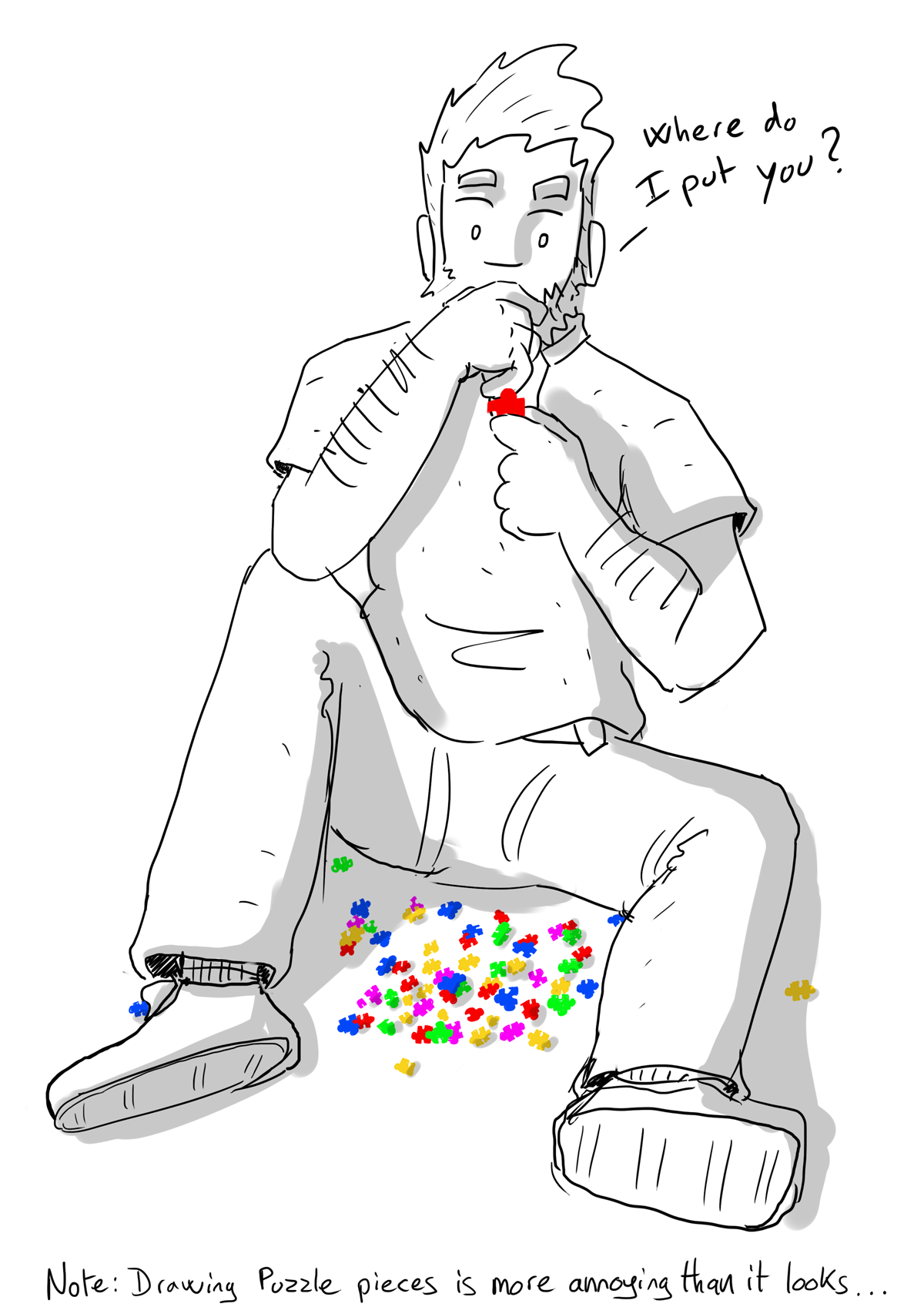 First we are going to run the assembly file through different software and scripts in order to get some general information from our assembly. We need to get the coverage values and GC content of all the contigs in the assembly. For this we use the mapper bbmap.sh from the BBmap suit.

The covstats option is here very useful because it will generate a table almost ready to use with all the information we need. We use the option minid=0.98 which is going to only count the reads with a similarity around 98% to the reference (ref) (Note: bbmap has the tendency to select a minimum identity lower to what you input, you can see the exact value in the output).

Once we have the file “coverage.stat” it should look like this :

The first # symbol of the file needs to be removed to be processed correctly by the gbtool package later.

We are going to look for ribosomal sub units makers, for this we use one of the accessory scripts of the gbtools package:

This script rely on a V-indexed database identical to the one used by phyloFlash. If you previously used it, you can use the same database. The path to the database should look like /PATH/TO/phyloFlash/119/SILVA_SSU.noLSU.masked.trimmed.fasta. (119 is the silva version)

Then we are going to detect tRNA and uniques genes in order to assess the completeness of the different bins present in the assembly. For this we run :
tRNAscan-SE -G -o tRNA.tab final.contigs.fa

tRNAscan as the name suggests it is a fast software to detect all the tRNA sequences present in the assembly.

The script above has a some commands to order the different file generated by both Amphora and Phyla Amphora scripts. But once generated you could very well delete these intermediate files. The two last commands are from the gbtools package to format the *Amphora output to be processed in R smoothly.

As I was processing this data, I realized that the output fasta name of Megahit look like something like this :

There are space in the name, and some script like bbmap can deal with them and other don’t like Amphora2 and PhylaAmphora. So there is two solution here:

The first line print the first column if you consider the file to have space as a field separator, and stores it in a temporary file, this allows us to keep the same name as well as the header . The second line actually print all column except the first one if you consider the file to have tab field separator and stores is in another temporary folder. Then we paste post temp folder together, but then I realize a little snafu with the separator being space and not tab. Oh well let’s just replace them into a new fresh table file and remove the other temp.

If you have a simpler way to do this, I am happily taking suggestions.

Now we have everything. We can then start to use Gbtools with R. To load the data we are going to use the following command:

Now we can finally plot all our information. We are going to plot the contig according to their coverage value and GC content, then we are going to overlay unique gene colored by taxonomy.

Legend add the taxonomy color legend of the Amphora markers, ssu and text label label contigs with identified Ribosomal subunit and their name. 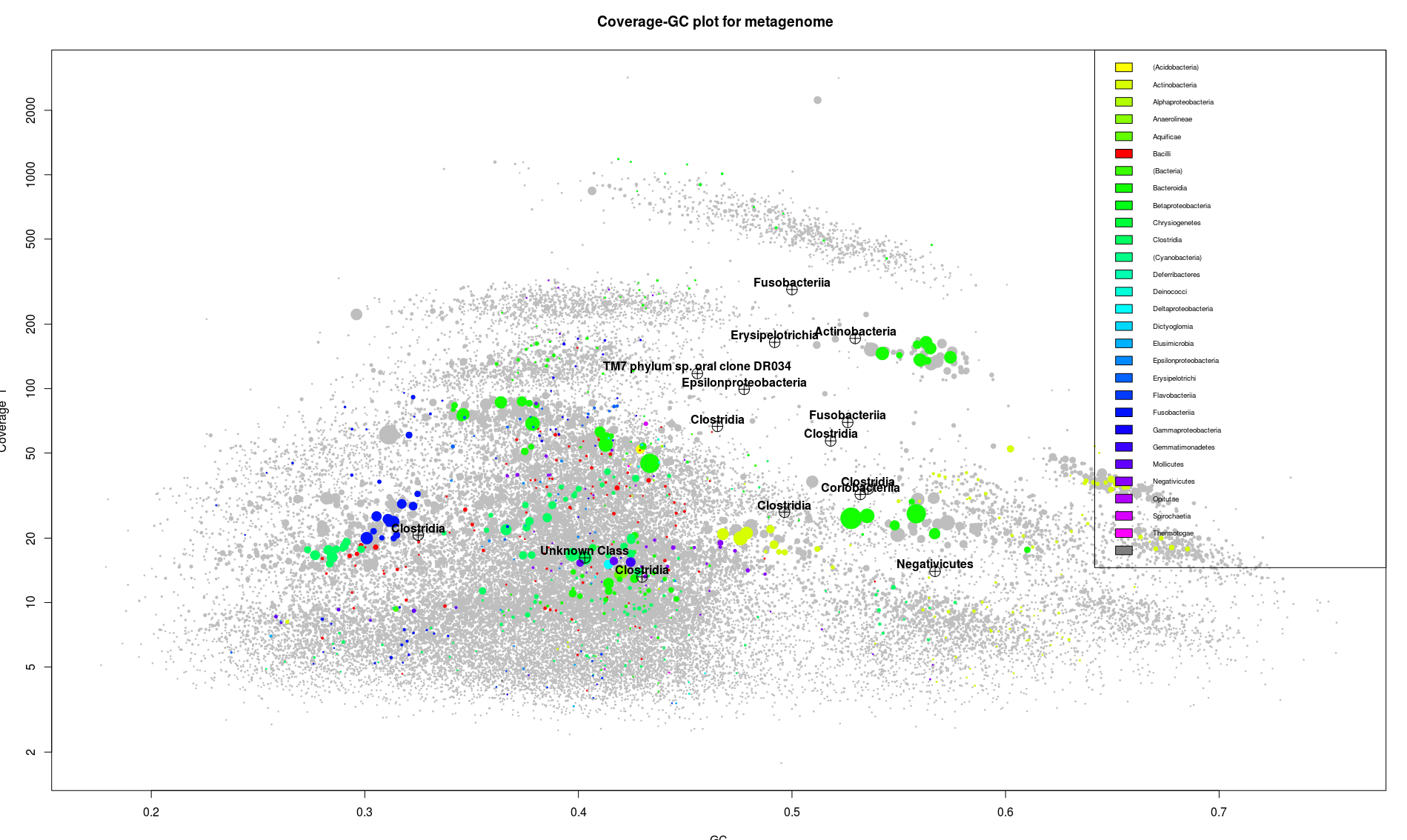 This picture contains a lot of information. The position and the clustering of the dots, indicates groups of sequences which are likely to belong together. Following this, each elongated little cloud would be a single bacterial genome. On the graph we can identify around 8 different groups of contigs. Likely to be 8 different genomes.

Also each one of these little cloud is associated to one color, which is a good thing indicating that they regroup unique genes from the same bacterial class. We can see the color distribution across the plot and have a better idea of what’s actually dominating the sample. In our case probably bacterioidetes and/or betaproteobacteria (the green color).

Let’s focus first on what we can easily identify, isolate and and analyze.

The best feature of the gbtools package is the ability to select a part of the plot and have a look of what is in it.

We didn’t closed the previous window plot because it will be used with the the following command to place dot on the graph to circle our region of interest:

In the center we have a huge blob which correspond to all the bacterial sequences which are present in the same abundance and share a common GC value. This article will try to go through this mix of sequences, but it illustrate the limit of this approach. If some organisms are not sticking out by abundance or GC value it become difficult to separate them. Fortunately there are some way around this, mainly based on the use of a different binning method.

Note: slice=1 mean that the point are to be displayed on the coverage against gc of the first table. This option is important if we have another coverage information table (Will be discussed in another article). By default choosebin use 6 dots,  if you want more than 6 points use the following

Now we click on the picture and place 6 dot around on of the cluster of contigs we are interested in, as illustrated below.

Here I would like to mention, I deliberately did not include any SSU sequence in the bin while plotting. 16S rRNA sequences are conserved accross the bacterial kingdom, and as you can see on the first plot above, they tend to gravitate in the same area, because they have more or less the same GC content; and depending of how many copies there is in the genome their coverage value is skewed. It is common for these sequences to be located outside their respective cluster of contigs

In some case the paired end connectivity can resolve this problem, it will be discussed elsewhere.

Ok now what ? you got me through this all process for what ? A fancy way to make boxes ?

If we just type this in the R console:

We will have the following information:

This report tells us that the bin we selected regroups 43 known marker from Amphora2. This software uses 31 marker genes, here we have all of them present in the bin and 10 are present multiple time. From now we cannot tell if it is a real information, duplication of some of these genes, it can happen or if we have a mix of genomes/strains.

However it is likely that we have isolated most of a bacterial genome. In the next articles we are going to see how we can now improve this genome. But we are not done here yet.

If you type the following:

And you will save in the file shortlist.file all the contig name isolated in bin1. It will be used with a small script to extract the related fasta reads from the initial assembly file. Here we use faSomeRecords from Jim Kent github.

here the first file is the initial assembly, the second one the shortlist and the last one the name of the new file with the extracted sequences.

We can now repeat the process and select/extract all these clusters of contigs easy to spot. 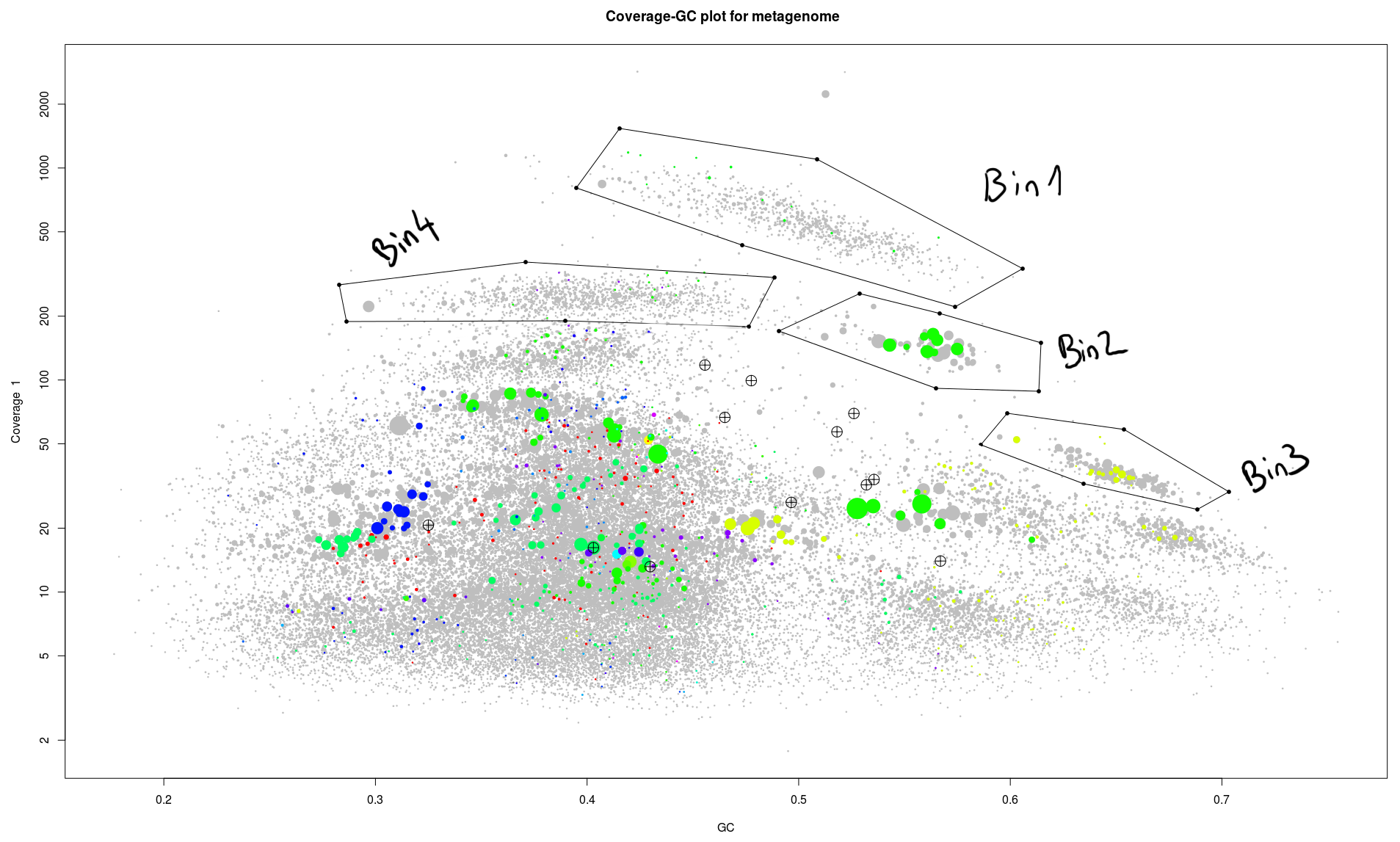 So we have four bins which are apparently easy to circle out of the rest of the genome.
Below are the stat of each one.

We started to isolate genomic bins, but we still have a lot to do with the current assembly file. We are going to end here for this blog post. In the next article we will try to handle the extraction of the less evident bins. Then we will see what to do with these bins.