I am sitting on this blog for too long. I think it is time I try to publish something useful on it. So to do so I am going to present here in a series of short articles how I handle metagenome analyses. I am not pretending to have the one and only solution, I just think it will be a nice to have it nicely documented somewhere (in case I ever forget how to do it) and if it can help someone in the same time why not.

This first article is going to describe what the early step of preparing raw read files before the assembly phase. I will present my process using publicly available metagenome from the Human Metagenome Project. I have selected the first metagenome available from the tongue dorsum sample category.

Let’s have a look a the bacterial community of the tongue of the female participant SRS147120.

This is a 100 bp paired end read library sequenced with the Illumina technology. 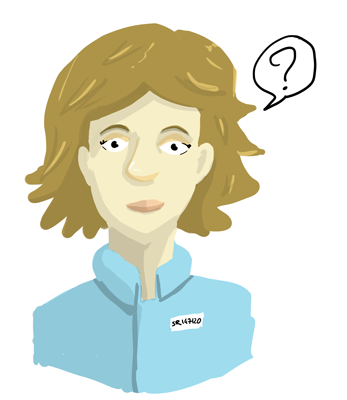 After downloading the raw reads from the HMP ftp, I extracted the reads from the bz2 format. They will be recompress on the next step to a more useful .gz format.

We can first have a look at the library quality, to do so we can use the FastQC software which output us with a summary looking like this: 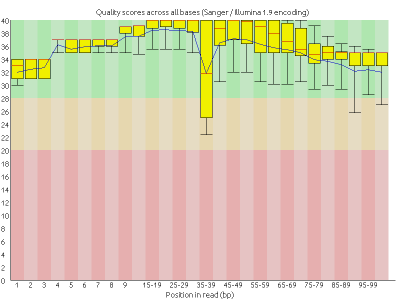 This indicates that overall the quality of the reads is good. On the middle of the sequence we can observe a drop in quality which is apparently due to a insertion of N. A thing to do is to clean the reads of bad quality reads and other sequencing artifacts (PhiX sequences, primers, etc…) using bbduk from Brian Bushnell’s tool box: BBmap.

We are inputing the forward and reverse reads with in and in2, with the ref option we ask the script to check a list of known contaminant of the illumina pipeline, trimq and qtrim options are going to trim read regions with a bad quality. Finally we are going to output the screened reads in an interleaved and gz compressed format. This is what the output looks like.

We had apparently little bad apple in the assembly (0,005%  the early quality check of the HMP people is efficient). What we can do now is to use a RNA subunit screening tool PhyloFlash. This tool is currently developed by one of my college: Harald Gruber-Vodicka. It allows to have a idea of what organism to expect from a metagenome/metatranscriptomic library. This is very useful to see if you have potential contamination in your library. (For example if you have butterfly sequences in a deep sea sample, it might happen). We run the following command:

Here the lib option call the name you want to prefix the outputted files, read1 your input file (can be read compressed), and CPUs call the number of processors you want to use. (Note if you ask too many processors, the process might crash during one of the steps because it distribute a fixed memory amount between the available cpus).

Having a look at the outputted file tongue.phyloFlash will tell you what taxa you can expect in your library. In our case, the metagenome seems to be host of a large diversity of different bacterial taxa. The output file is placed in the following collapsed section.

From the previous file we can see that phyloFlash predicts around 200 OTUs in total. It also try to sort out the different taxa per abundance, based on the concept that the more a taxa is present in a sample the more sequenced reads it will be.

We know now that we should expect large diversity. From the different prediction methods it seems that even if the precise taxonomic identification varies,  Betaproteobacteria, Bacterioidetes, Firmicutes and Gammaproteobacteria are among the most abundant taxa.

On the right is a pie chart representing the class of different OTU predicted by the EMIRGE module. I only displayed the taxa predicted with a ratio above 0,5% of the total reads used. This is certainly biased but it help predicting what is in our library.

Once this step is done, we can proceed to the next phase, the initial assembly and its analysis. This will be explained in the next article.