I am always amazed by what Science Fiction was able to predict right, predict wrong, and better than that what was completely unforeseen. Recently we were re-watching the first “Blade Runner” and I kept annoying my wife by pointing out elements falling into each category.

Beyond the fact that 2019 will probably not look like the noir dystopian future, with flying police cars over our heads, I think many elements are on point. We are just not there yet. Particularly the suggestions that some animals are artificial/genetic products that you can buy in a bazaar. We are on the way, on one side animal cloning companies are popping right and left (for naming just the two most famous) and on the other side, we have the rise of bio 3D printing technology, which aims to recreate tissues and organs (here). This is not coming without a fair share of ethical controversy, start here for cloning and here for 3D bio-printing. Beyond simple cloning, there have been huge advances in the robotics industry – just check out the latest Boston dynamics teaser here. There is something uneasily natural with the robot’s little look into the camera…

“Is the snake real?”

Now looking at the things that the Blade Runner movie, and most other Sci-Fi opuses I’ve came across from a pre-2000 era, completely missed: until recently, to me, the best example was the concept of wireless connections, in particular the mobile phone. I loved when a few years back I came across the review of “The Prisoner”. I used to watch this TV Show from the 60s, back in the early 2000s when I was a bored teenager stuck with a weird Caribbean cable program in French Guyana (aka I thought there was nothing to do in the jungle… fool I was…). I remember one of the criticisms of that show when it came out to be too “Unrealistic”, because many of the props, like music speakers and phones, where wireless. And this was for me for a long time the best example on how human creativity and society will still be a little bit unpredictable.

This changed when I started my biology degree and I started to read about the concept of storing data in DNA. Although I have to say that thinking about the concept is not that crazy at all, it was just not foreseen at all. The concept has been around for a long time, the original idea is attributed to Mikhail Neiman who published it in the USSR Radiotekhnika journal in 1964-65! The original publication in Russian can be found here. This idea was only realised in the early 2000’s. Since 2014 many critical milestones have been reached.

In 2016, a Washington lab, in cooperation with Microsoft, managed to publish a method where they encoded Tolstoy’s “War and Peace” and 99 other classics in DNA. It also allows retrieval and decoding methods that enable random access to any one of the datasets. The full text is here.

The latest method was published in March this year by Erlich and Zielinski (here), which allows perfect retrieval of information from a density of 215 petabytes per gram of DNA, achieving 85% of the theoretical limit of DNA storage. It is described better here by Ed Young.

Storing data in DNA has many advantages, among others the longevity. DNA is a very robust molecule that can withstand variations of temperature and humidity, but if kept in the right condition (cold and dry mainly) it has a very low degradation rates. If we can extract DNA from a mammoth, stored data in DNA could last thousands of years. This is seen as a solution for storing the ever-growing data mountain in a radical miniature molecule.

This is however not ready for large-scale use, as it costs $7000 to synthesize 2 megabytes of data and another $2000 to read it. But we will be there eventually.

This year two interresting papers came out. In the first study a GIF (here for the non open access paper and here for a short summary on the nature blog) and, even better, in the second a malware software designed to pirate DNA sequencing machine (here) were encoded in the genome of a bacteria.

“The GIFs above are taken from Eadweard Muybridge’s Human and Animal Locomotion. The GIF on the left is the original (created from the movie file) while the one on the right was reconstructed after researchers encoded the information into DNA.” — Seth Shipman

The bigger picture behind placing a GIF in a bacterium’s genome is to in a later stage being capable of recording genetic cellular events during larger biological events. Nevertheless, I found the concept of being capable of transferring data through a living population of bacteria quite interesting. On the contrary to just storing data in a molecule of DNA, storing the data within a living organism will come with more constrains and some benefits. Bacterial DNA is fluid, pieces can be removed exchanged and/or modified, so the longer the DNA is placed in a bacterial population the longer it risks to be lost or corrupted. But on the other hand, on the short term it will have a better protection against the environment, provided by the bacteria.

All of these stories are opening the doors to many new options for Sci-Fi plots, with intriguing and maybe a little bit technical/geeky twists. I can picture an illegal data transfer from one secure country to another or the corruption of sequencing medical facilities with “bacterial malware” or “bacterial spam” with information hidden within your own microbiota!

You can find bellow my own little attempt to a very simple spy-data-bacteria story (holywood or spy agencies you know where you can find me): 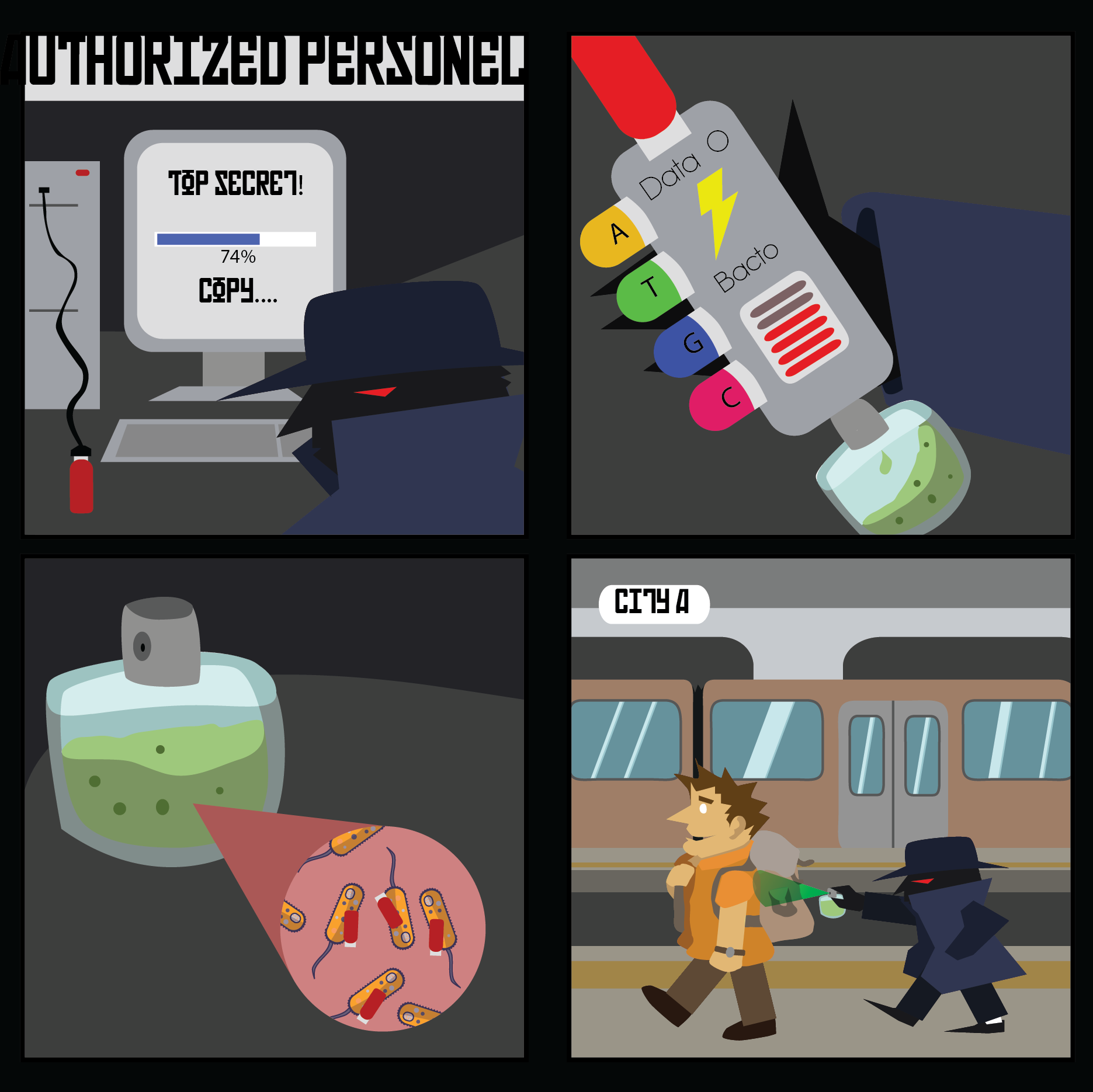 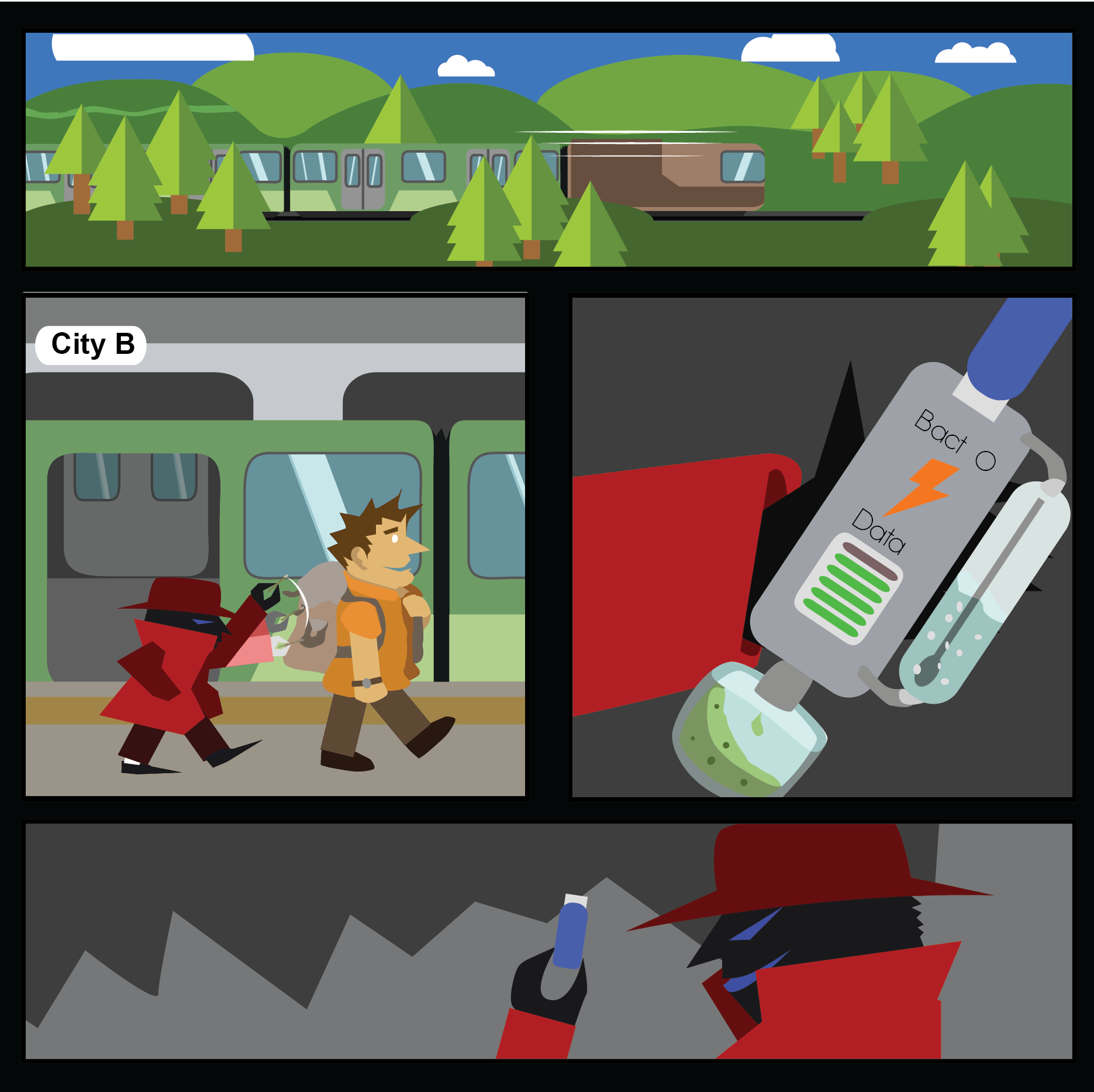 Some graphical assets (the trees) where lazily found here. The Blade Runner picture is of course not mine and is Copyright © 1982, 1991 by the Blade Runner Partnership and/or The Ladd Company or Copyright © Warner Bros, I don’t really know to which one…