A story of epibionts in deep sea mussels – My first paper published !

My very first paper : “A specific and widespread association between deep-sea Bathymodiolus mussels and a novel family of Epsilonproteobacteria” is finally available as an Early View on the Environmental Microbiology Reports website.

For the past four years, I have been working with deep sea bathymodiolin mussels. They are one of the famous dwellers of the dark abysses with the giant tube worms Riftia. Discovered at the same time as hydrothermal vent in 1977 they have been studied for the past three decades. These mussels are fascinating because they host in their gills tissues bacteria capable of harnessing chemical compounds to produce energy like plant would use the sunlight. These endosymbionts belong to the gammaproteobacterial class and are located cozy inside the first layer of epithelial cells and pump sulfur and/or methane from the water flowing in the gills of the mussel. In exchange for shelter the bacteria are likely to participate to the nutrition of their host and this would explain the luxuriant communities of bathymodiolin mussels around cold seeps and hydrothermal vents.

In my paper, I am describing an epibiotic association between a filamentous Epsilonproteobacteria and the bathymodiolin subfamily. A distant bacterial partner associated with the mussel from the outside rather than the inside was something completely missed in the past thirty years. I have screened a dozen of different species of bathymodiolin mussels and figured out that the same Epsilonproteobacteria were regularly found associated with seven of those species. Using fancy digital reconstruction of whole mount FISH (Fluorescence In Situ Hybridization) I nicely showed the ectosymbiotic distribution of the bacteria on the top of the gill epithelium.

One of the reasons of why these epibionts were missed in the passed was technological limitations. Up to a few years ago, the gold standard of diversity analyses was to perform clone libraries of the small ribosomal subunit. This method has a limitation due to PCR bias which as the tendency of over-amplifying the presence of the most abundant bacteria in the communities. In the case of bathymodiolin systems, these are the gammaproteobacterial endosymbionts, the rare occurrence of epsilonproteobacterial were often thought as environmental contamination. 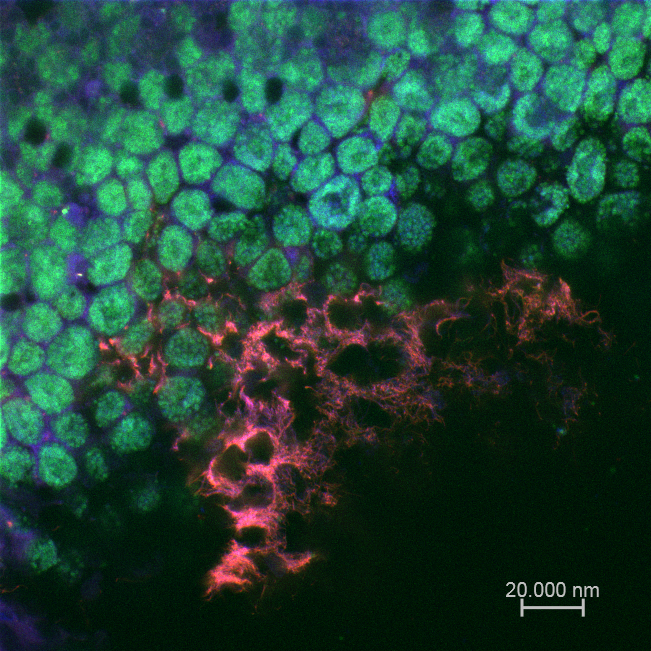 The picture above was taken from a Fluorescent in situ Hybridization analysis performed on the gills of “Bathymodiolus“ childressi. I used a general probe to target all bacteria in green and another to specifically target the epibiotic Epsilonproteobacteria in red. This picture is part of a series coming from a whole mount analysis: an entire piece of gills was scanned in a confocal microscope at different depth axis. On the picture above we can see that Epsilons are nicely rounded around the bacteriocytes.

One of the most interesting I think is when I looked at the association between bathymodiolin mussel and ectosym-/epi-bionts. Or the lack of it. The system where I found the Epsilonproteobacteria when investigated with FISH did show the presence of only one bacteria epibiotically associated. Whereas the species not associated with the Epsilonproteobacteria did not show any bacteria associated with the outside of the mussel tissue. This alone suggests that the mussel has a defense mechanism against prokaryotes and that the epibiont found a way to counter it and specifically associated with bathymodiolim mussels.

The next step of this work is to look at what is the exact role of these bacteria. From our observations, the mussels associated with epibiont did not show any sign of diseases and Epsilonproteobacteria are found associated with other deep-sea invertebrate, such as Kiwa crabs and Rimicaris shrimps, in mutual beneficial relationships. So from first guesses they could be commensalist (just enjoying shelter without harming anyone) or mutualist partners rather than being harmful to the mussel. Future work might help to answer this question.

Finally, I am amazed by the fact that even after 30 years of research, the deep sea still has secrets from us. And some almost right in front of us, colonizing the outside of a system where all the attention is toward the inside.